You are here: Home / Alison's Blog / I thought I was a widow on September 11th- updated
Like it? Share it!

I thought I was a widow, as I watched the towers fall on 9-11 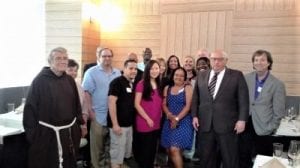 My husband, John Dunham (in the blue shirt and khaki pants) attended a survivors of the World Trade Center Marriott, luncheon. The photo is of those survivors.

As there is still “living history” I believe it is important for those who were a part of it to share with those who weren’t (or who weren’t even born yet. If you were there, or if you remember, please add comments.

That morning on 9/11, my husband called me from the World Trade Center from the Marriott, where he was planning to attend a nearby conference that I think was supposed to be at Windows on the World.

He was still in the Marriott when he told me he’d heard a huge explosion. He asked me if something had happened.

I turned on my television and saw that one of the World Trade Center towers was on fire. While I was still on the phone, I saw the second plane turn.

At first, I thought it was a plane taking photos. I begged my husband to get out of there but he was waiting for a colleague. I don’t know why but I felt that the tower on fire might collapse.

As I was still watching the television and arguing with my husband to get out,  to my offer, that second plane plowed into the other tower.   I could hear it through my window in Brooklyn.

The cell phone tower was damaged and my phone went dead.

Again, without knowing why, I went to our roof deck because I didn’t know what was really going on. I couldn’t believe what I’d just seen.

For some reason I also don’t know, I left the television on.   I left a message for my mother in law in Colorado on her answering machinee. I knew she’d see what had happned on television and I didn’t want her to worry.

When I got to the roof with my camera, I took some photos. I guess I needed to document something my brain could hardly process.

Both towers were completely engulfed in smoke from the Battery to the Empire State Building. What I remember most was that the thickest, blackest smoke I’d ever seen literally engulfed my view,

I stood there for a while, and then the wind shifted and the thick black cloud of smoke moved towards me so I went back downstairs to close my windows.

As I said, the Television was still on, and so I could see the second tower collapsing just as I closed the windows.   I really assumed my husband was dead in there. Now I was a widow.

My twin sister lived in the DC area and her husband worked on Capitol Hill.

I called her and we tried to make sense of what was happening up here and down in DC. We couldn’t. Then I called my father. He didn’t have much to say about it either. No one really did. W

Who could make sense of this?

And then there were the other attacks. It was just mind-numbing.

My brain began racing, wondering what I was supposed to do if my husband never came home again.

Finally, I did get in touch with my husband at someone’s office with a landline uptown.  I can’t even begin to describe the relief.

I may not have the exact sequence of events correctly, but as I recall, my husband said that while he was on the phone with me (and I was screaming for him to leave the building)  he went outside (or was close to the exit).

At first, he said, no one was allowed out of the building so they were trapped.

Then everything went dark. My husband and a colleague helped some woman outside. People were literally trampling them. Perhaps they stood outside for a short while, wondering what to do, and as the second plane hit.

Body parts and pieces of the jet plane were flying around, hitting the ground, John and his colleague didn’t’ run South as so many did, they first ran to the World Financial Center and then they didn’t stop running until they got to Canal Street or 14th Street,

I can’t remember which.

Back at home, I was watching the scenes of desperate people holding hands and jumping, or diving alone out of the Trade Center Windows to a solitary death. But these are scenes that traumatized my husband for months because he saw it live.

He had been in the army reserves. The body parts and pieces of the plane and fire and smoke reminded him of war, he later said.

The two men had to walk all the way home to Brooklyn and It took hours. Brooklyn Borough President Marty Markowitz or his staff were handing out water to people on the Brooklyn Bridge.

That night, we had dinner with my husband’s sister and brother in law, grateful we were together. In our family for a few days were three survivors who had nowhere to go.  The next day we helped them find their way home,

I also took photos of the survivors on our roof, the background with smoldering ruins of the twin towers. I don’t know where I put those photos.

The world was quiet. That’s what I remember most–New York has a pulse a hum…and we’d lost it.

As I recall, there were men with machine guns on our street corner, it was surreal. We couldn’t get over the bridges or through the tunnel to leave Brooklyn, even though we really wanted to go somewhere else.

We were trapped in our own neighborhood, at least for a few days. The lack of freedom, seeing tanks, machine guns, a silent world of grieving people, and trying to process our own grief, that was almost overwhelming. I couldn’t believe this was America.

We lit candles. We walked silently through other groups of people, walking in a daze.

Anyone born after the World Trade Center attacks will never know what”freedom” used to be like.

There was a time when you didn’t literally disrobe at airport security. You could walk freely into a public building or event without fear, and without showing ID or having your bags searched.

That is gone forever.

Our windows remained closed literally for two months, as particulate matter from the World Trade Center literally rained down upon our neighborhood,  leaving pieces of clothing, Kantor Fitzgerald papers, and human ash (plus whatever other toxic waste was at the WTC) on our doorstep.

It was also in the air we had to breathe. We could keep the windows closed, but when we had to go outside where there was a coating of ash on literally everything we touched, and swirling in the air.

For at least three months, debris was falling on our windows and all over the neighborhood, with the worst of it within the first 4 weeks. As time passed my husband and I began to cough.

I didn’t really think much about it, figuring that the weather was changing and that could have caused the persistent wheezing.

When my indoor cats starting wheezing and coughing I knew something was really wrong. One of our cats died the next year, the other had wheezing fits.

As to what we were breathing…..we live near one of the most polluted arteries in the city. If you dust our shelves, they are dusty again (the kind of dust you can write your name in) within an hour.

When the WTC came down, we kept all our windows closed, but the debris that hit the windows pitted the glass. We had to replace them as it looked like you were seeing through waxed paper.

Outside we could literally feel the particles as they landed on our clothes, our hair, our skin…for about a week.

The actual, physical paper and other assorted ash literally coated the Brooklyn Heights streets for about two weeks. Occasionally after that we still found pieces of paper from 9-11 landing on everything in the neighborhood. 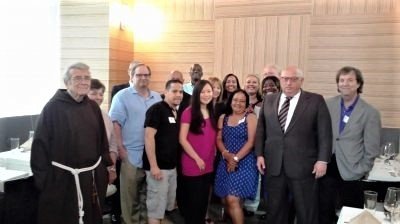 All that separated my family in Brooklyn from those in the pit, is a small bit of water. There really has been no mention of the fact that so many people have been exposed to nearly as much toxic material as those across the water,

There is no safety wall between the air at the World Trade Center and the air across the river in Brooklyn.

What More Is There To Say?

I thank the brave men and women who rushed in to help save lives when everyone else was trying to escape.

I wanted to join the rescue workers and I volunteered with the Red Cross. I really wanted to go to the World Trade Center site but they had enough people there, so I ended up working a 9/11 hot line .

On the Red Cross helpline, I really didn’t know what to say. There was so little information.

I feel so helpless because all I could do is tell distraught people That I understood. That my husband had been there, I’d lost friends and colleagues too. That I would work hard to get them whatever information I could.

In 2015 after I posted this on Facebook, someone wrote that he didn’t give a CRAP (his words not mine) and it is time to forget 9-11. because there are horrific terrorist acts around the world and why aren’t we remembering all of them?

I am not repeating my full response. But consider: by now, many people reading this 9-11 feature weren’t even born then   There have been plenty of horrific events in history.

However, anyone who has witnessed these events will eventually die. History repeats itself if we forget. We should never forget.