You are here: Home / Travel, Food & Culture / A Turkey Showed Up On My Doorstep and I ATE him! @SwitchToTurkey #Jenni-O, #holiday, #Thanksgiving
Like it? Share it! 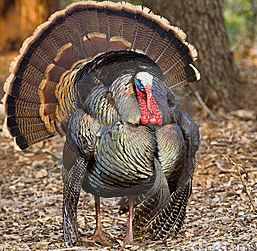 you can’t cook THIS one as-is

The other day a turkey showed up on my doorstep.

It wasn’t alive, of course. It was an Oven Ready Whole Turkey from Jennie-O.

When most of us think of the holidays, and food, we think of one thing: TURKEY!  But along with all those happy memories of mom (or grandma, or someone else with cooking skills) lifting that fragrant bird out of the oven, and someone else (with carving skills) carving it to perfection, there are the funny, sad and simply horrible stories of a table-full of people waiting expectantly for a holiday meal, and the harried hostess realizing she under-cooked or completely burned, the bird.

Cooking a turkey can cause a lot of anxiety, so much so in fact, that there are actual “hot lines” for people who are wondering what they need to do to save their meal from destruction!  And furthermore, if you are having a lot of people over for dinner, finding a place to keep a frozen turkey and then defrost it in time to cook it, can be an issue as well. 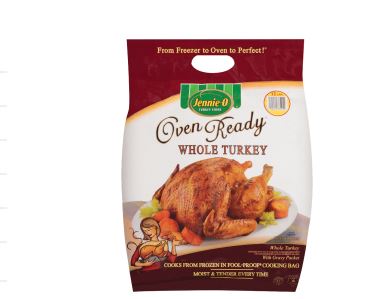 you don’t have to defrost or season this frozen, Oven-Ready turkey from Jenni-O just pop it in the oven

So it was with surprise, and a bit of delight, that I received the OVEN READY™ Whole Turkey from Jenni-O which I knew I was supposed to try.  There wasn’t any poundage on the package, but I estimated that it was large enough to feed at least 6-8 people. Still, it fit into my half-empty freezer where it sat for a few days until I was ready to cook it. 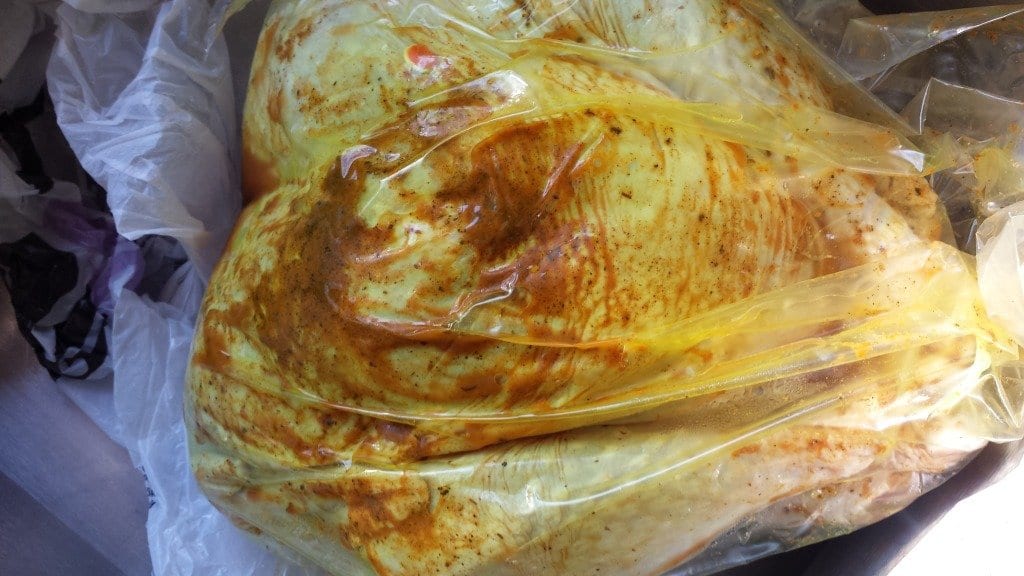 this turkey comes pre-seasoned and in a cook-in-bag. DO NOT THAW. All you do is pop it in the overn

The thing about the Jennie-O® OVEN READY™ Turkey is that you don’t have to thaw it, you just take it directly from your freezer to a roasting pan (I purchased a throw-away one), to your oven, no thawing needed.  It even comes with its own gravy packet so you don’t have to make your own.  You can’t stuff the turkey as it is in a sealed cook-in bag already seasoned, but a busy holiday host these days probably makes stuffing on the side instead of putting it in the turkey, anyway (an unstuffed turkey cooks faster, too).

The two things I didn’t know (because they were not marked on the outer packaging).  is that one of the benefits of this frozen turkey is that you don’t have to thaw it first. In fact, you are NOT supposed to THAW the turkey first as with a traditional frozen turkey. Also, the outer packaging did not show the WEIGHT of the turkey (so you have to guess).  These are two pieces of information I would have liked to know.  The approximate roasting times are on the bag, but not the weight. I thought that was strange. 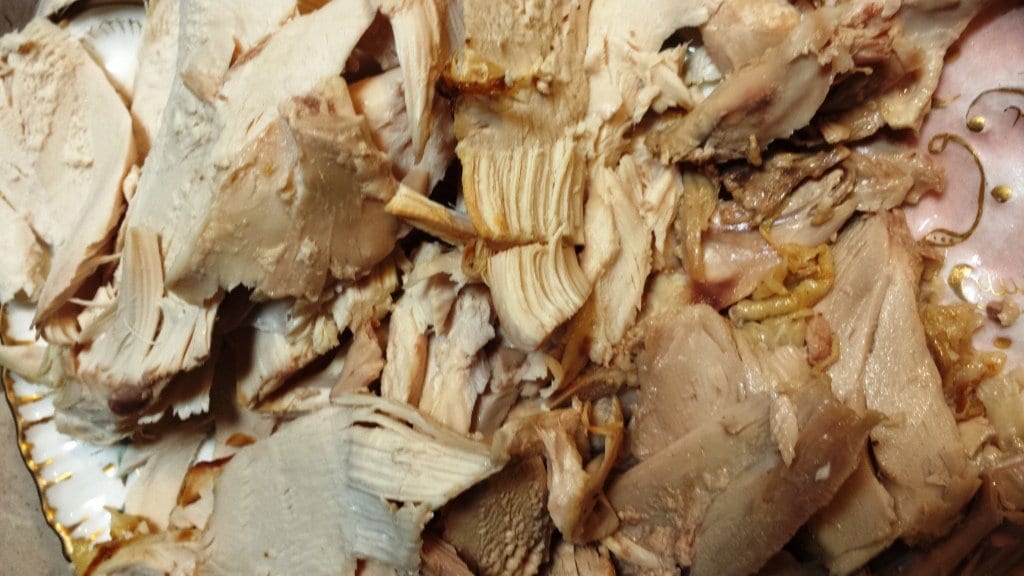 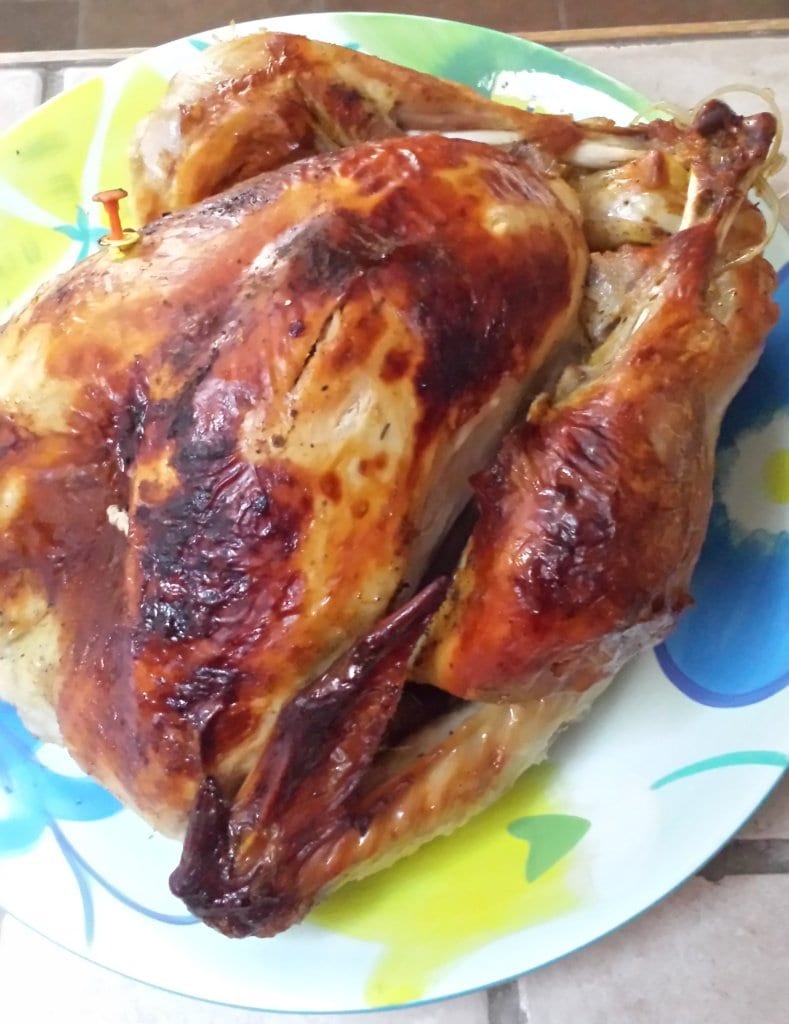 the cooked turkey was amazing and there was really no mess

But that aside, I put the turkey in the oven, and the results were really good.  And the sodium levels were just around 460 mg (also not on the bag, but on the Jennie-O website) which, for a pre-seasoned product, isn’t bad.

If you want to try it yourself, here are the cooking instructions:

Despite my turkey and I having a bit of a rocky start while trying to figure out how to cook it, the turkey turned out to be absolutely delicious. I used the pop up timer as a gauge for how long it should remain in the oven, and when the pop up, popped, it was done, perfectly. The meat was perfectly seasoned (much better than I could have done it myself), and it was tender and moist. I don’t think I’ve ever cooked a better one personally, and this turkey was one of the tastiest I’ve ever had. I doctored the gravy a bit, and it was too thin for my taste so I thickened it . You can always make your favorite recipes (or the one from the can) if you prefer.  I added an easy stuffing, and some vegetables, and a very nice wine, and my husband and I had an incredible meal…and then several more! 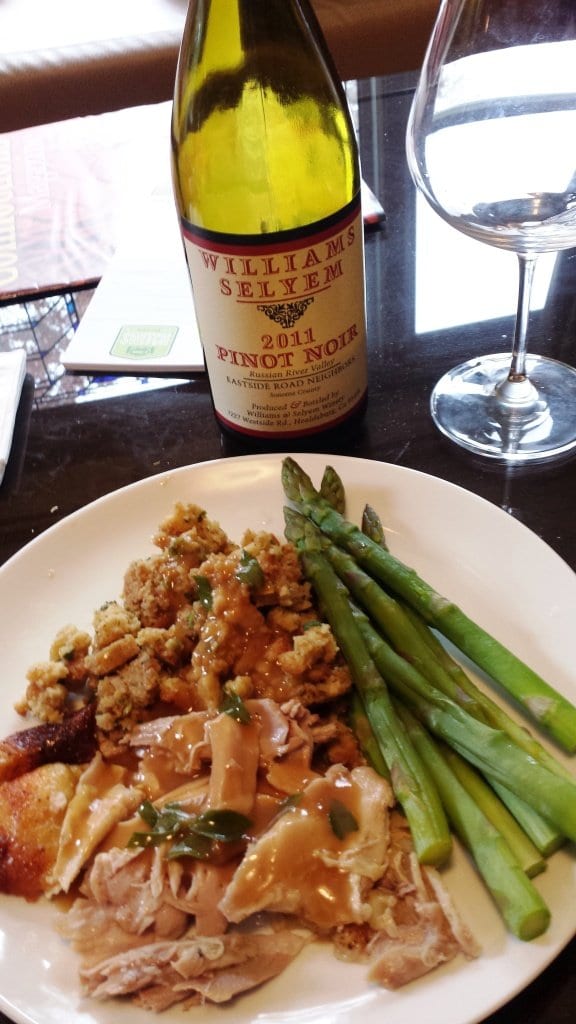 For the busy cook, for the inexperienced cook who doesn’t want to “guess” and ruin a holiday meal s/he is hosting, for someone who just doesn’t want to mess of prep and cleanup, this turkey was really a little holiday life saver.

There is a store locator for Jenni-O products on the Jenni-O web site, but, alas, for this particular product the closest turkey I could find was in a Walmart more than 30 miles away, but for many other people, the convenient of the directly from freezer to over to table turkey is going to make the holidays much easier, and a lot more delicious.