Every time I think about France, I think about a great line from Woody Allen’s 1975 movie Love and Death.  In this film, Allen, playing a soldier in the Czar’s army asked his sergeant why they were fighting Napoleon.  The dialogue went:

Allen: Why are we fighting the French?

Sergeant: Imagine your loved ones conquered by Napoleon and forced to live under French rule. Do you want them to eat that rich food and those heavy sauces?

Sergeant: Do you want them to have soufflé every meal and croissant?

The movie is in my opinion, Allen’s most humorous.  But on a serious note, the French Institute Alliance Francaise (FIAF) is a private non-profit organization that promotes and enhances knowledge of France and French culture in America.  FIAF hosts exhibitions of French artists, photographers and craftsmen in its gallery, presents cultural programs and film series and is one of the foremost French language schools in New York.  One program that FIAF is presenting is the Wine Tour de France, a series of four tastings and master classes hosted by New York fine wine merchant Millesima.  The first of these was held on February 8, and focused on the food and wine of the Champagne region.  Future classes will examine other aspects of French winemaking including vintage (March 14) and varietals (April 18)   *for more information and to purchase tickets visit www.fiaf.org. 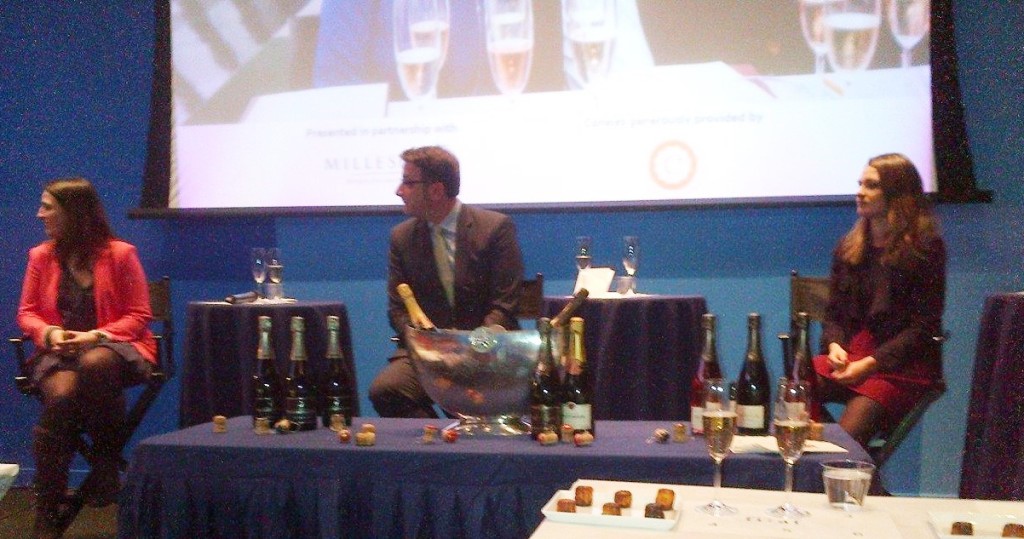 The FIAF Champagne tasting was hosted by Hortense Bernard, the General Manager of Millesima USA, and featured presentations by Nicolas Delion, from Taittengier, and Charline Drappier, from the Drappier Champagne family.  According to Ms. Drappier, the Champagne region is a cold region, and the climate is what makes it special.  The cold helps to balance the flavors and the acidity of the varietals used in Champagne wines.  These wines are generally a blend of three varietals, Chardonnay, Pinot Noir and Pinot Meunier, grown in the region, and produced according to specific rules including secondary fermentation in the bottle to create carbonation.  While some wines produced in America are labeled as Champagne, in reality only wine produced in this special region is truly Champagne. 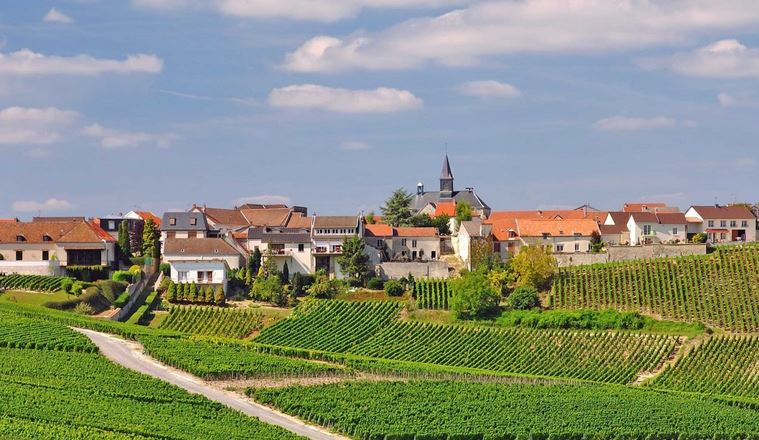 the Champagne region in France

Champagne is generally a blended wine, produced from these three varietals and usually blended from a number of different vineyards and even different vintages in order to produce a specific taste profile defined by the winemakers and the specific Champagne houses.  The profiles are generally defined in terms of the amount of sweetness in the wine which comes both from the grapes themselves as well as the amount of sugar added after the second fermentation, called the dosage.  Wines labeled as Brut or Extra Brut have very low levels of residual sugar, Extra Dry Champagnes are sweeter while wines labeled as Sec, Demi-sec or Doux contain larger amounts of residual sugar.

In addition to the label demarcations, there are distinct house styles that produce different taste profiles.  English style (traditional ) champagnes tend to be heavier, thicker wines with a less active mousse (bubbles).  What might be called, New World, champagne is more acidic and citrusy, featuring apple, pear, and citrus, notes in their flavor profiles.  A third style of champagne – Old World styles feature creamy, yeasty and forest flavors. In choosing a champagne one needs to take both the house style and the classification into account. 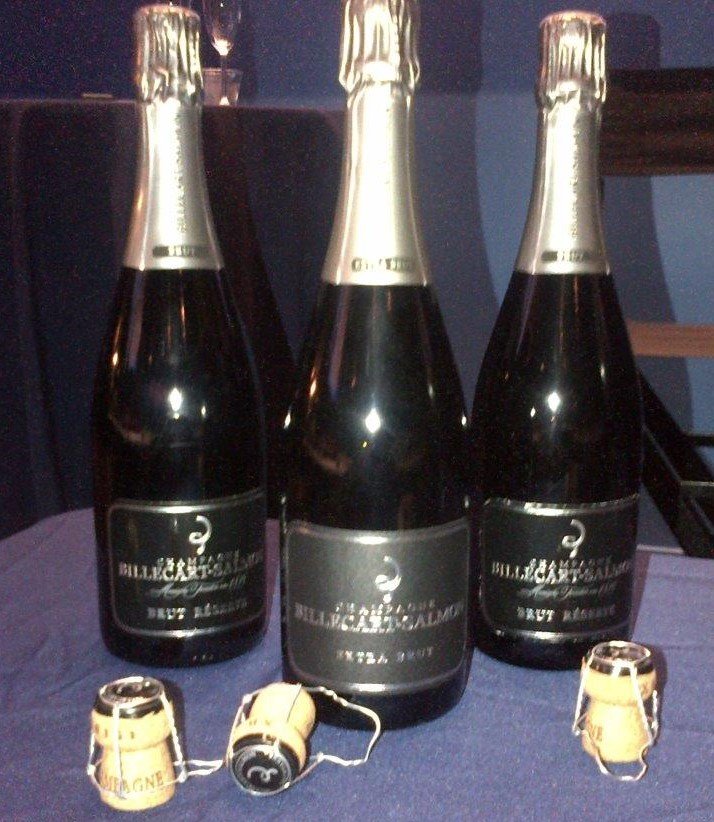 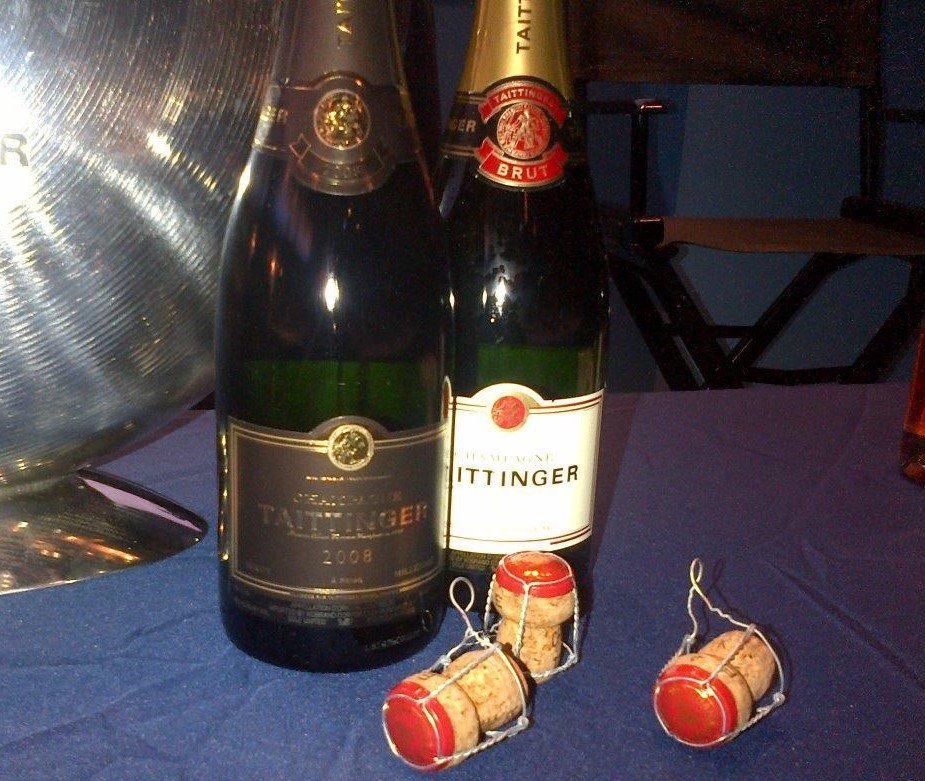 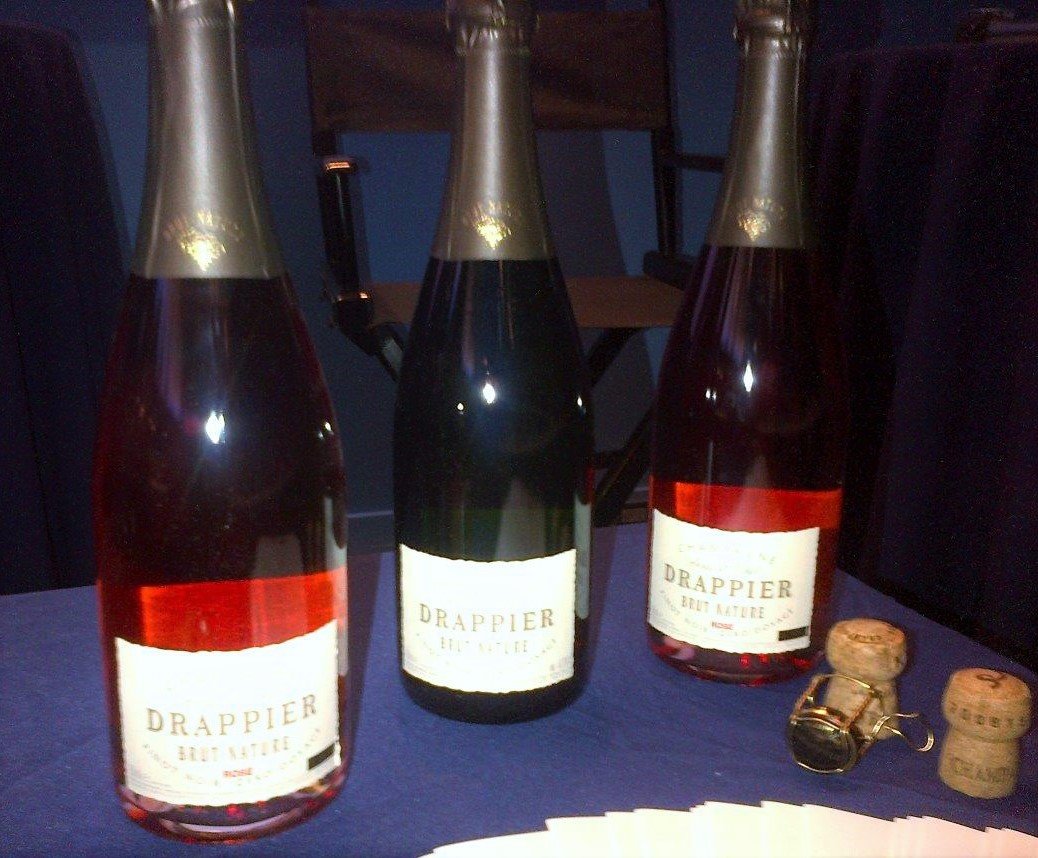 The FIAF tasting featured a total of 6 wines, each of which was matched to a Canele, from Canele by Celine.  These small cylindrical French pastries have a soft and tender custard center and a dark, thick caramelized crust. Canele by Celine augment these with a range of savory, fruity and spicy flavors, and different flavored pastries were paired specifically with each wine.

The tasting started with Champagne Drappier Brut Nature, ($49.99) which is a 100 percent pinot noir based wine (about 70 percent of the grapes grown by Drappier are pinot noir).  The wine had the color of light hay with a tine of red.  The nose featured pear, Asian pear and a hint of maraschino cherry.  The wine was dusty dry, very well balanced with great acid making it a good food wine.  The palate featured apple, and just a hint of vanilla.  The wine was paired with a parmesan cheese canelé, which brought out the minerality in the wine.  Champagne Drappier Brut Nature will pair well with marine foods, particularly shellfish and is a great wine to just drink for a celebration.

The second wine was Champagne Billecart-Salmon Extra Brut ($59.99) which has a large amount (40 percent) of Pinot Meunier in the blend.  The wine was very light gold in color with a foresty nose that opens into a white peach.  The wine is clean and balanced with good minerality, some citrus notes, peach and pineapple with an apple finish.  The wine was an English style champagne with a think feel, which would pair well with fish, turkey and pasta.  The wine actually overpowered the light Dijon mustard flavored canele.

Champagne Taitinger Brut La Francaise ($44.99) is 40 percent chardonnay.  It has a light mouse and a light straw color.  The nose was dominated by a condensed milk smell, with notes of honey and nuts.  The wine was light, well balanced with good minerality.  There was a bit more sugar in this wine on the palate, with notes of sugarplum, and a nuttiness on the finish.  This old world style Champagne would pair well with cheeses, heavier foods like pasta, and would be great to drink by the fireplace.  It paired beautifully with a bacon flavored canelé (yum) which helped balance out the sugar in the wine.

The fourth wine Champagne Billecart-Salmon Brut Reserve ($49.99) which is a third chardonnay, a third pinot noir and a third pinot meunier.  The wine was almost clear in color with a vibrant mousse.  The nose featured light apple and honey notes with a hint of yeastiness.  The wine had a great deal of character, with light minerality.  Cherry and yeasty notes gave way to peach and pineapple on the finish.  This is a seafood, shellfish wine and has a “celebration flavor” about it.  The cherry flavored canelé brought out the cherry notes in the wine, a really cool experience.

We moved next to Champagne Taittinger Brut Millesimime ($89.99) This is a 2008 vintage wine made entirely with grand cru and premier cru chardonnay and pinot noir grapes.  The wine was light gold in color with a very light mousse.  The nose had some forest notes, citrus and marine notes.  The palate was very complex.  It was yeasty and creamy with a bit of nutmeg on the finish. The fruit notes were light featuring peach and mango with a very long finish.  The wine was paired with a vanilla flavored canelé, and the vanilla shoots out of the pastry when eaten with the wine.  It would pair very well across the board with nearly any food.

The final wine in the tasting was Champagne Drappier Brut Nature Rose ($64.99) a salmon colored wine with a medium mousse.  The nose was smokey, though not powerful, with just a hint of vanilla.  The wine featured spicy, peppery notes on the palate, with lots of minerality and some yeastiness.  This wine will pair wonderfully with seafoods, salmon and turkey, and was a great accompaniment to the dark chocolate canelé with which it was paired.

This was an excellent seminar with truly knowledgeable presenters.  It was particularly great to meet Charline Drappier, who is from the 8th generation of the Drappier family who began producing champagne in the Aube region in 1808.  My wife and I look forward to meeting the Drapiers when we visit the Champagne region later this year,. The class brought out the distinctiveness of the three main house styles of champagne, and showed how each matched with specific foods and tastes.  The take-away for consumers is that no matter what kind of champagne style you might like, there’s something for everyone and each “house” is different – Vivre La Difference, Vivre La France!

For further information on the tasting series, visit www.fiaf.org

For further information on the champagnes featured in this tasting visit www.millesima-usa.com