You are here: Home / Uncategorized / Happy GroundHog Day 2016 SO: did he see his shadow? #groundhogday
Like it? Share it!

Happy GroundHog Day 2016: Did he see his shadow?  & marmots to watch

Some people say Christmas is the best day of the year. Others insist it’s their birthday, or the day their child was born, or their wedding day, or the day they accomplished something incredibly special. But for me, it’s February 2nd, Groundhog day!

Every year I post something about Groundhog day.  Theoretically, the groundhogs tell us whether or not we will have an early Spring by coming out of their burrows and either seeing a shadow (or not).

Why do I love Groundhog day so much? The truth is, I really dislike cold weather and the bleak, dark days of Winter that (for me) seem to go on forever. Whether or not the groundhog sees a shadow, by February 2nd, the days are actually getting longer and no matter how cold and dark it is right now, Winter is on it’s way out. Furthermore, it’s such a positive thought” Spring is coming!

this groundhog used to live under my fire pit, but it’s Summer in this photo!

Groundhogs are marmots, and they supposedly come out of hibernation this time of year to scent mark territory (part of the mating ritual).  Wild groundhogs have a short lifespan, but some have lived 6 years or more. A ground hog named “Nitche Ned” lived under my fire pit for years, bringing a friend “Nitche Nell” and some babies. Alas, I haven’t seen any for a few years now. Rabbits and some chipmunks have taken up their former residence.

I love to celebrate Groundhog day, but most just ignore it, possibly catching a fleeting report on the news from a weather reporter freezing atop Gobblers Knob in Punxsutawney Pennsylvania waiting for the “Inner Circle” (a bunch of groundhog handlers wearing to hats) to report on the undisputed king of the groundhogs: Punxsutawney Phil (he is the “prognosticator of prognosticators’). 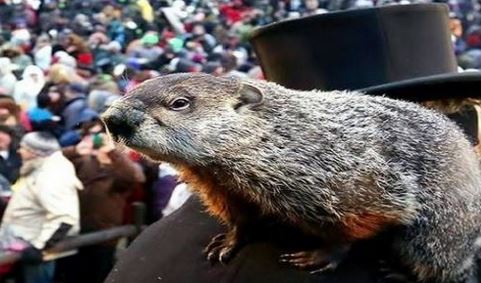 Does Phil see his shadow or not? That’s the question. Groundhog Day (February 2nd) has it’s roots in a European tradition that if a hibernating animal (usually a hedgehog) casts a shadow February 2nd (Candlemas) then winter will last another six weeks. If no shadow is seen, Spring will come early! The legend states: “For as the sun shines on Candlemas Day, so far will the snow swirl in May” When German settles came to Pennsylvania’s to settle early in America’s history, they continued the tradition, exchanging the hedgehog for the more abundant, groundhog

Once the  large group of very cold but enthusiastic witnesses have heard from Phil’s official handler whether the groundhog has seen his shadow or not, it’s time to party (or race back to a nice, warm room).

Closer to wherever you live there are likely other prognosticating groundhogs. Not all agree with what Phil sees, of course.   Here are some famous weather groundhogs to watch:

*did Phil see his shadow this year?  Groundhog day didn’t happen yet, but I’ll update this page when Phil has done his job so come back and check what the prognosticator of prognosticators, has in store for us!m  UPDATE 7:25 am : YES, THERE WILL BE AN EARLY SPRING! PHIL DID NOT SEE HIS SHADOW! SPRING IS ON THE WAY!