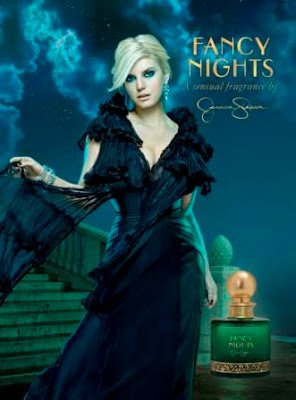 Fancy Nights by Jessica Simpson is the latest in a line of successful fragrance launches for the singer/actress.  Jessica has had a busy year both in business, and in love. However, she’s been more fortunate with the success of her product lines, including her fragrances, than she has been in her personal life.  With the launch of Fancy Nights, things should be looking up, more than ever. 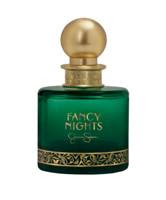 This latest fragrance, Fancy Nights, is the third is a series of “Fancy” scents for Simpson.  The presentation is lovely.  A stunning, metallic gold cardboard carton embossed with swirls all over the top and bottom and all four sides, leaves just a small, smooth space for the “Fancy Nights” name and Jessica Simpson’s pretty,script signature. Inside,  a regal-looking, rounded glass bottle sports a ribbon of gold swirled design, leaving the emerald green glass clear except for the Fancy Nights name and Jessica Simpson’s signature, also in gold. Not so subtle is the large, brushed gold collar (with the same, embossed swirly design in the gold plastic), and the extra large, ”gumball”  topper over the spray diffuser. The bottle is reminiscent of an art-deco one that is in Jessica’s own collection.


Fancy Nights is a feminine floriental scent. It’s not light and girly, but it’s not “grandma” either.  I think it reflects where Jessica is in her life right now. She’s older and more mature than when she was first in love and married to Nicholas Lachey and her first fragrance line, Desert, launched. That collection was full of sugary sweet, “edible” fragrances that was all flirty girl.  Even the first of the “Fancy” trio was a creamy, gourmand scent, geared to an audience probably about the age that Ms. Simpson was when she launched it.  Fancy was created by perfumer Alexis Dadier of Mane, developed with Parlux Fragrances and the Camuto Group.

This new fragrance, Fancy Nights, is not “flirty girly” but is more sensual –a woman’s floral. It is by far, the most sophisticated of the “Fancy” trio.  Fancy Nights was created by Steve DeMercado at Fragrance Resources, developed with Parlux fragrances and the Camuto group. Parlux, for those of you who really like to know who is behind your favorite, celebrity scents, also holds the licenses to manufacture and distribute Kanye West, Marc Ecko, Natori, Nicole Miller, Queen Latifah, Rihanna, babyGund and Fred Hayman Beverly Hills, and Paris Hilton (I will be reviewing her newest, Paris Hilton Tease, shortly).

As you can see from the photo at the top of this post, Fancy Nights is meant to be an evening/special event fragrance. I have heard some snarky comments about this photo, but I think the photo expresses Jessica as she is now, and if she looks different and a bit wistful, well…I think that’s the point.   Instead of all that bouncy brightness and blonde-ness–all hair and breasts, Jessica has classed up her image. She is subdued in this ad. The background is a blue green, as in twilight. Jessica wears a wispy black gown that mostly covers up her renowned assets. Her skin is pale, and she’s wearing tons of blue-green eye shadow that rings her eyes. The contrast of her pale, pink smile and the hair that’s mostly pulled back and concealed, adds a grown up touch.  .

As to the actual fragrance, I know I’ve talked about everything else first.  But let me get to the verdict:  I like the fragrance.  It leans towards the oriental (spice) more than the romantic florals.  It starts with an unusual top note: Papyrus, and some lemony bergamot. While I have never actually smelled papyrus, I believe it’s an intense green smell. And the heart of the fragrance is intense: night blooming jasmine, Bulgarian red rose, and Indonesian patchouli. What makes Fancy Nights, well…fancy…is the sexy base notes that are mature, spicy and woodsy, and of course, sensual: Tonka bean, sandalwood, cedar wood, oak moss and exotic amber would not be out of place in a man’s or unisex scent, Jessica Simpson Fancy Nights also has peru balsam, and just one somewhat gourmand note to smooth out all that wood and spice: vanilla absolute. At drydown you get a whiff of the florals, but it is the base notes that last. Younger women will wear this for special events and dates, but women will like it for everyday as the weather gets cooler. Even better, the 3.4 oz. Eau de Toilette is $59.00 and the 1,7 fl. oz bottle is just $49.00, with an additional of a Body Lotion (6 fl. Oz. $30.00).

Ready to rock this sensual scent?  Get Fancy Nights at Macy’s or macys.com

Copyright ©Alison Blackman Dunham. All rights reserved.The Advice Sisters is a registered United States trademark. No content may be used or copied with written permission. If you want to use my work, please obtain it legally: Email Me. Subscribe to this blog -options on right hand column. Follow me on

I use provided samples for most of my reviews. Learn more in the “A Note About Compensation” section of the Advice Sisters What Works Beauty, Cosmetics and Fashion Review column
(Visited 13 times, 1 visits today)