You are here: Home / Fashion / One-on-One With Fashion Designer Julian Chang @Julianchang, #JulianChang, #fashion, #SS2016
Like it? Share it! 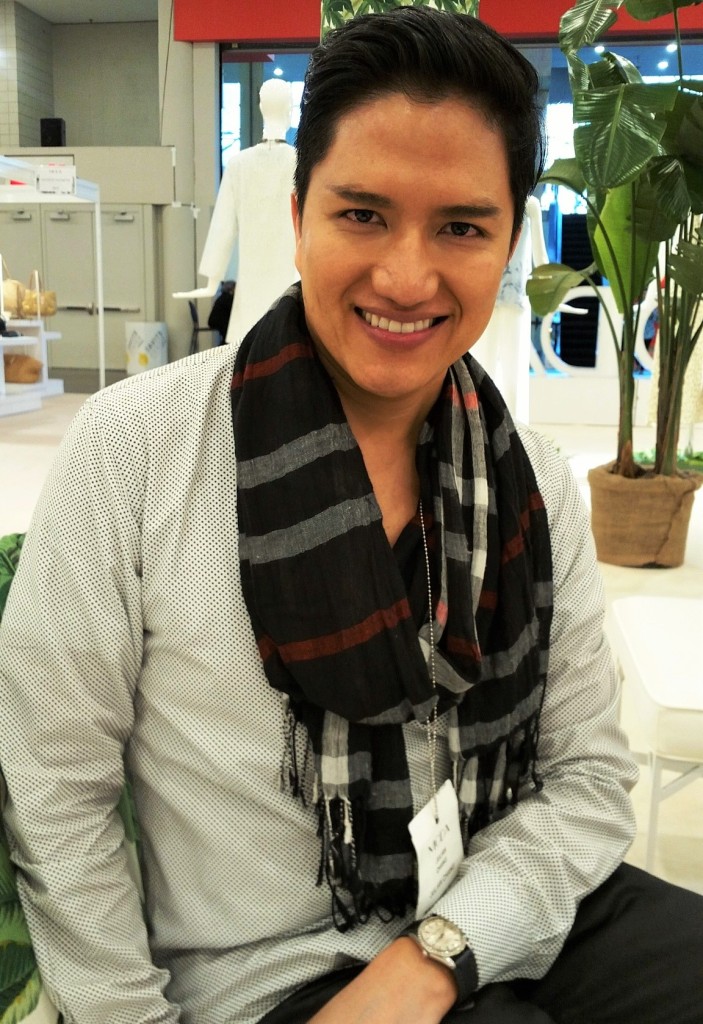 Fashion Designer Julian Chang has an infectious smile that could light up a room. Good thing. Rain was pouring down outside the Javits Center in Manhattan as crowds poured into Moda Manhattan to take a peek at the fashions of the Spring/Summer 2016 collections.

Julian Chang’s booth was bustling, but the Miami Based designer took a few minutes to chat one-on-one about his upcoming SS 2016 collection, his inspiration for his designs, and what keeps him going. 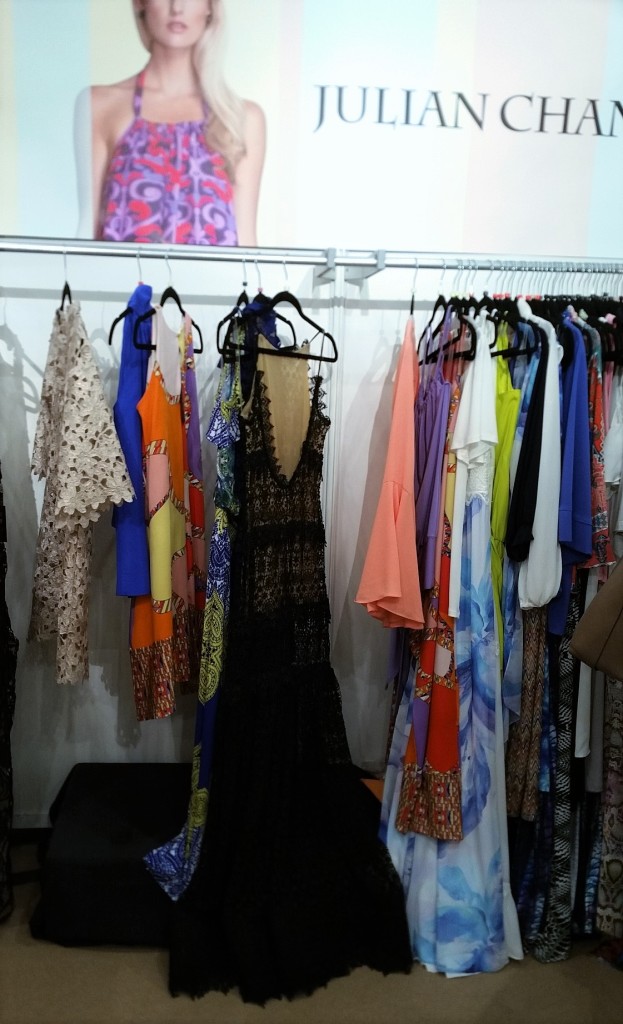 Checking out the jumpsuits, flowing halter dresses, and mini dresses that could have been just at home in the swinging ’70’s as today, I got the impression that the young, hip girls in Miami’s nightclubs would be the ones wearing Julian Chang clothes, but according to Julian, his loyal customers skew  to 45 and beyond.  The bright colors and light fabrics reflect the fact that he lives and works in Miami Florida, and the tropical, Latin feel is appropriate for the climate and the clientele. Think: bold color, texture, prints, tropical! 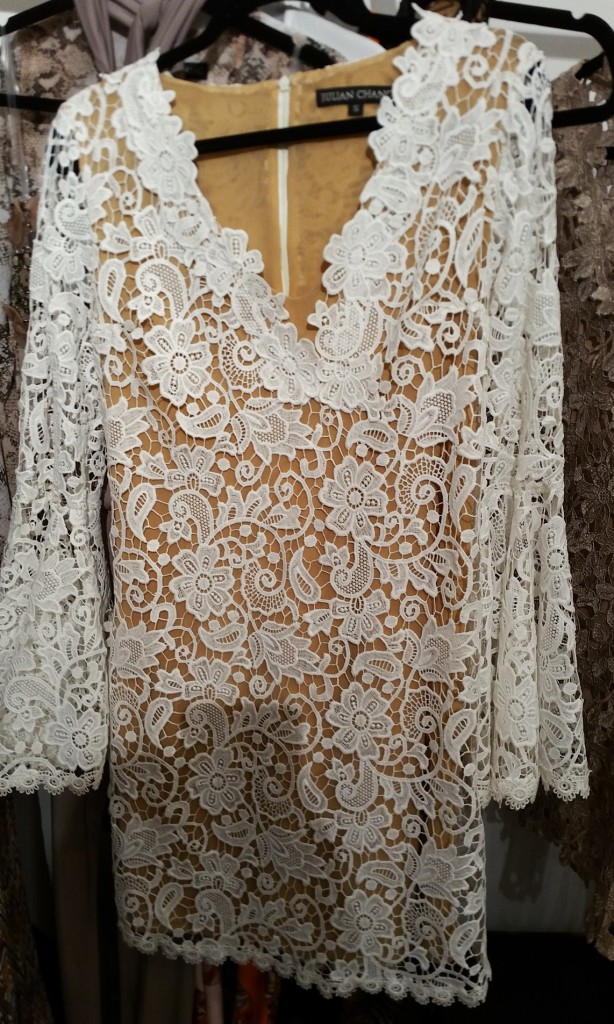 one of my favorite pieces from the colleciton, a Julian Chang dress Spring Summer 2016

It is challenging to design for every woman, but Julian Chang managed to offer a little something for everyone, albeit with a Latin/Miami vibe.  When I asked him (in a word) to describe his clothing, he said (without hesitation): “comfortable.”  Perusing the racks of clothing at the Moda Mahattan show I personally would have picked the word:  “exciting” to describe the mini dresses,  lots of lace,  sheer sleeves, sexy jumpsuits, halters, off-the-shoulder styles, drape-y, knee-length vests, big bells bottoms, lots of black and white, and bare skin (but tastefully bared) that he is featuring for Spring/Summer 2016.  The vibe is definitely the  ’70’s and the omnipresent Boho trend.

The words I’d use to describe Julian are: confident and affable.  Many designers are full of themselves, but Julian is almost humble. It is obvious that he understands the realities of business and he understands his customers.  Interestingly, the designer is realistic and almost welcoming of feedback even if it is critical. He told me that customers would come into his store and tell him they didn’t like this or that, or they would make suggestions. Julian listened and tweak things. He isn’t afraid of rejection. He knows it is part of things, and it’s an incentive to make changes and make his brand even better.

The designer honed his craft in Lima Peru before moving to Miami. Other people wanted the designs he made and sold, so he began to sell elsewhere. Julian Chang is now an international brand. FYI:  All the Julian Chang designs are made in the USA. 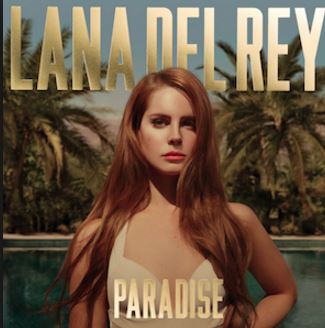 Julian told me that music inspired him — he loves it.  While his customers are from all walks of life, Julian Chang  designs have been worn by Britney Spears and Gloria Estefan, and featured in publications such as Cosmopolitan, Lucky, Vogue, and Vanidades.   He admitted that one of the things he really likes best is creating couture gowns for performing artists. One in particular that he mentioned is  “torch singer” Lana Del Rey.

Just to show that anyone can rock a Julian Chang design, I was fortunate enough to receive this lovely blouse from the designer. The deep v neck is flattering, and the silky fabric flows over any figure flaws. I’m wearing it with black jeans, but this would look fabulous with white pants or a skirt, as Spring arrives.  *admittedly I’m not the queen of the “selfie” but I wanted to add these photos so you could see a real person wearing this fabulous blouse!

If you’d like to know more about this engaging, talented designer visit http://www.julianchang.com