You are here: Home / Beauty / May the Star Wars (beauty) Force Be With You @CoverGirl, #BeautyForce, #StarWars
Like it? Share it! 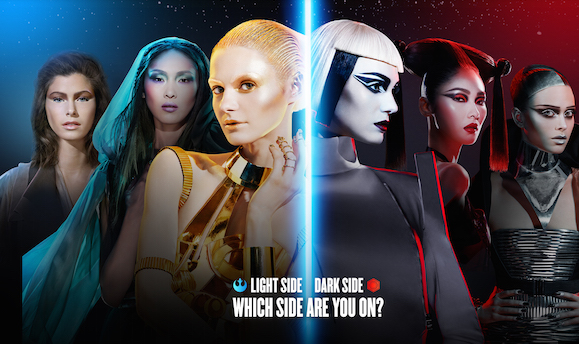 May the Star Wars (Beauty) Force Be With You

It’s past the release date of December 18, 2015,  for Lucasfilm’s highly anticipated Star Wars: Episode VII.  Have you seen it yet?

When the first Star Wars movie came out in 1977,  I was one of the first to see it. I was so excited by the film that I bought s few collectibles including, for some reason I can’t remember, a blanket with the Star Wars logo and the main characters on it (I was young, who knows what I was thinking)?  I finally gave the ratty thing away, but shouldn’t have because by now it is surely a collectible.

Fast forward to 2015 and yet another in a line of successful and beloved Star Wars Film is launched: Star Wars: The Force Awakens. As with all of the other Star Wars films, this one has a string of interesting and definitely collectible items along with it.  I’m not going to buy another blanket, but I definitely would stock up on COVERGIRLS’s  Limited Edition, first-of-its-kind beauty collaboration with Star Wars: The Force Awakens. The six looks in the above photos (three for the Light Side, three for the Dark Side)  are the ones  that inspired the makeup looks done by COVERGIRL Global Creative Design Director Pat McGrath. She created the pieces from the COVERGIRL Star Wars Makeup Collection, as well including some existing products. We are focusing on two: The “Droid” look from the Light Side and The Stormtrooper look from the Dark Side, as I think these really show off the dark and light side collections.

Here’s the official description of the Star Wars: Episode 7 The Force Awakens cosmetic line coming from COVERGIRL:   “In celebration of “Star Wars Episode VII: The Force Awakens” and Star Wars’ female fans, COVERGIRL created a limited edition line of cosmetics products inspired by the film, its iconic characters and a key theme of light and dark. The collection, along with six stunning looks created by COVERGIRL Global Creative Design Director Pat McGrath, is designed to enable women to celebrate their fandom, transform their look, and express multiple sides of their personalities. Broken out into Light and Dark, there are ten SuperSizer Mascaras that feature different quotes from the film, six new Colorlicious Lipsticks in daring shades, each shade corresponding to one of the six looks, and three Outlast Stay Brilliant Nail Glosses in limited edition, Star Wars packaging.” 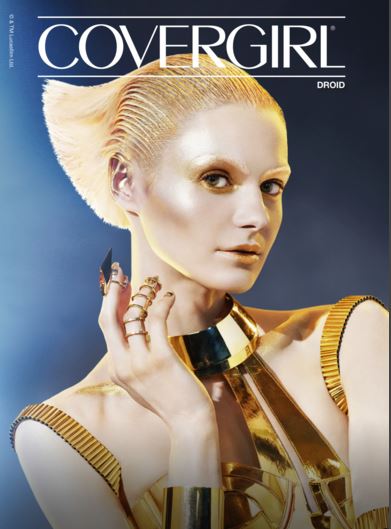 DROID: one of six looks created by Pat Mcgrath for the COVERGIRL Star Wars Collection

The limited edition collection (srp. 45.99-$7.99)  launched in September, but if you hurry, you can still find these collectible items online and in stores.  For a Star Wars fan, they’re the ultimate stocking stuffers but for those who want to push the envelope, beauty-wise, the colors in the collection will give you a wealth of ideas. We received some items from both the light and the dark side to sample. We tried enough to tell you that these are definitely fun, but they’re not “toys.” They’re serious, high performance makeup. They are just what you’d expect from COVERGIRL!

We selected two of the six looks that we feel epitomize the Light and Dark side of the collection, Glamorous Droid features a light and very golden look from the Light Side in “Star Wars: The Force Awakens.” A swatch of golden eye shadow across lids and cheekbones sets the tone, with gold lipstick and gloss punctuating the lustrous palette. Droid is rocking a new metallic lip shade – COVERGIRL Star Wars Lipstick – Colorlicious in Gold #40. 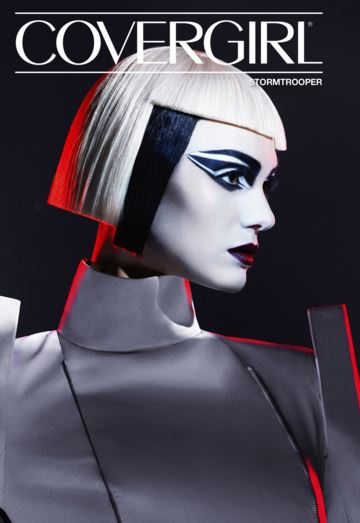 STORMTROOPER: one of six looks created by Pat Mcgrath for the COVERGIRL Star Wars Collection

There is also a strong, avant-garde look that represents the power of the Dark Side Stormtrooper features a strong and graphic look with black winged liner and white contrasts. Lips measure up in a deep, mysterious red. Stormtrooper’s edgy look is topped off with a new lip shade – COVERGIRL Star Wars Lipstick – Colorlicious in Dark Purple #50.

The Light Side: The Force Awakens mascara :  “May The Force Be With You”; “Do, Or Do Not, There Is No Try”; “You’re My Only Hope”; “I Feel The Good In You”;“Luminous Beings Are We”

The Dark Side The Force Awakens mascara: “I Will Finish What You Started”; “There Has Been An Awakening”; “Indeed You Are Powerful”; “You Will Meet Your Destiny”; “Immune To The Light”

I am not sure why so many mascaras. There are 10 SuperSizer Mascaras in the Star Wars collection, divided into 5 Light Side(Waterproof) and 5 Dark Side (Regular) mascaras. Obviously the eyes are key to both looks. These super large mascaras are named for iconic StarWars movie lines (cute) and the SuperSizer mascara is good, for everyone on any “side.” They have large cases, but the “Lash Styler” wand is quite slim with shorter bristles, so you can get every lash coated using a flexible formula that lets you sculpt lashes any way you want.  COVERGIRL claims SuperSizer makes lashes 400% bigger.  They really do color amazingly well even with one coat, but if you want “fat lashes” use several coats. Here’s how to use it:  Start by placing the Lash Styler right at the base of the lashes,using the flat side – immediately saturating the lashes with mascara. Then comb the volume through from root to tip, by twirling and rotating the wand through your lashes. The shorter bristles deliver a generous helping of mascara, while the longer bristles combs it through.  Use the wand correctly and you’ll get the amazing lash looks you love. 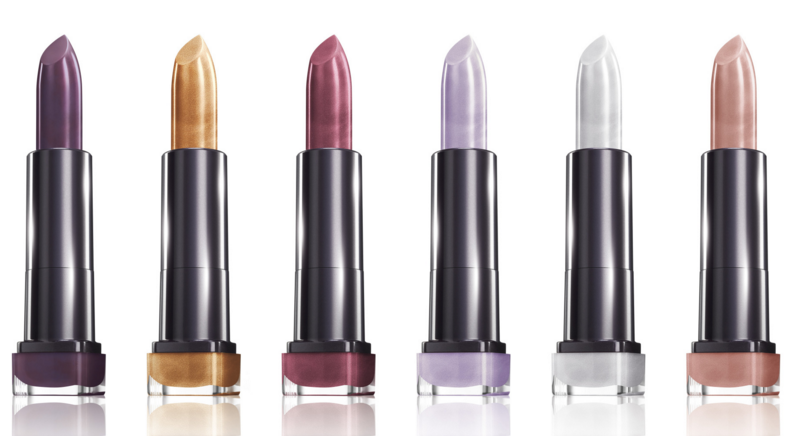 There are also six new Colorlicious Lipsticks  ($5.99) with each shade keyed to one of the six looks and three Limited Edition Outlast Stay Brilliant Nail Glosses ($4.99) . 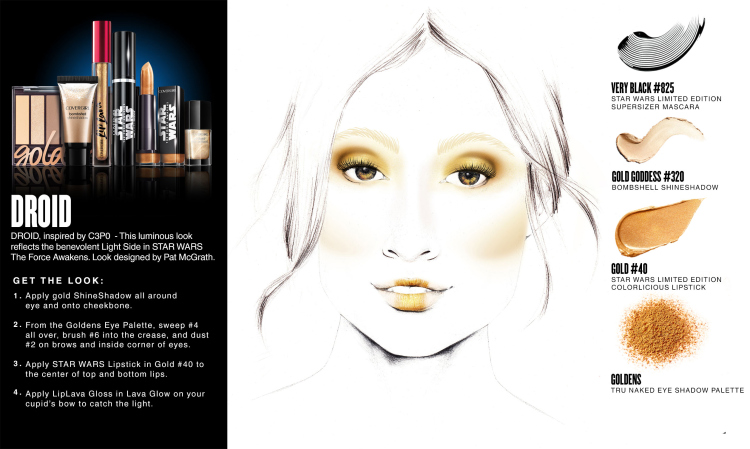 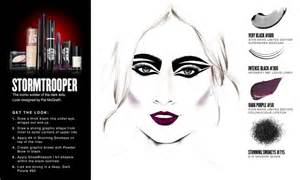 We sampled two of the COVER GIRL Star Wars collection lipsticks from the Dark Side, Red #30 is rusted red with a hint of metallic perle which looks very flattering. Pat McGrath paired it with Dark Purple #50. On it’s own, the deep purple color will be adventurous for those used to just a pretty pink or red.  Pat McGrath really knows how to mix and match these colors to make unique looks (as in “Stormtrooper” where she pairs #30 red with #50 Dark Purple or the Droid look from the Light Side where she pairs golden “Droid” with Nude #70).  I have provided the complete looks above, but honestly, this type of lip look is tricky.  If you want to try it, here’s how:  Keep the  sides of the lips light, the middle, dark.   These lip shades are  on opposite sides of the spectrum, and all the colors in this collection will create drama, but may be less tempting to wear if you aren’t into deep dramatic looks, or super-super pale lips.  I’d buy them anyway as collectibles if you can find them. Keep them in the original packaging, because they have the Star Wars: The Force Awakens logo on them. On the other hand, the lipsticks are silky and pampering, with lots of moisturizing ingredients like Shea, Avocado and Aloe Butters, plus Olive-derived Squalane (which replicates skin’s natural conditioning), along with Antioxidants of White Tea and Vitamin E.

The three nail polishes are all wearable, High-gloss Outlast Stay Brilliant formula polishes that combine a base coat with high-gloss color, and a chip-resistant top coat. We love the all in one formula.  Any of these are trendy and fun, and if you aren’t working hard with your hands, they could last up to an entire week!  At under $5.00, they are not just collectible with their black square tops emblazoned with the Star Wars logo, they’re a bargain! 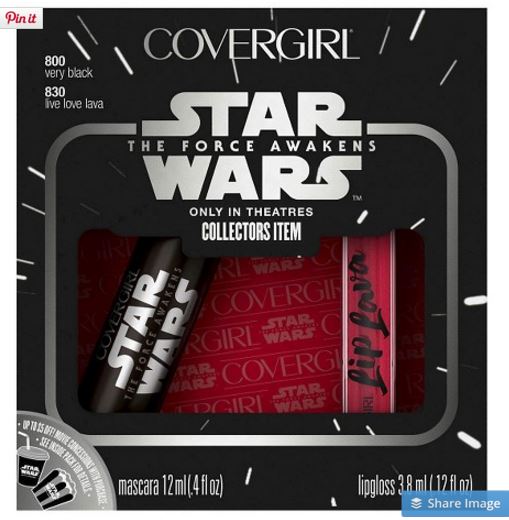 And one more thing!  The limited edition boxed collector’s set of Dark Apprentice graced our doorstep as well. The Dark Apprentice Set is boxed, and you might want to keep it that way, but maybe not, since the set includes two really hot items: COVER GIRL’s Limited Edition Super Sizer Mascara and Lip Lava Lip Gloss. . The COVERGIRL Star Wars Limited Edition Collector’s Set ($10.00)  featuring the Dark Apprentice Look is dramatic, with red lips and BIG bold eyes. A makeup artist can make red on eyes look amazing, but I’d suggest practicing before you prance out the door with red eye shadow. *the red and black eye shadow is not included,  The mascara is seriously dramatic in Very Black, and the Lip Lava Lip Gloss is bold red, shiny, but lustrous without being so shiny it’s only wearable at night. The hybrid gloss formula combines highly pigmented shades with iridescent pearls that slides on easily with a brush-tipped wand. If you want other boxed looks as well, The Stormtrooper set focuses on the eyes, the Jedi set has a pink lip gloss and a mascara.

As I said previously, these have been out for a while, so take your Jedi Cruiser and fly to mass market retailers (e.g. Target) if you want to get these before Christmas arrives.  Otherwise, visit the COVERGIRL Web Site  to order there!