You are here: Home / Entertainment / Sarah Brightman Fans Watch Her Concert, New Album “Hymn”
Like it? Share it! 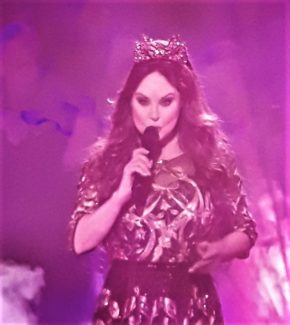 Fans of soprano Sarah Brightman get excited! See Sarah on the big screen in a concert that was filmed in Bavaria at the Festspiehaus.  The concert is in celebration of Sarah Brightman’s upcoming new album “Hymn,”

Fathom will also distribute the feature to theaters in the UK, Ireland, Europe, South America and Australia in the coming months. For more information visit Fathom Events.

For those who haven’t discovered her yet, British born Sarah Brightman is a vocalist, songwriter, dancer, and actress who has appeared in musicals such as  Cats and The Phantom of the Opera, both composed by her ex-husband Andrew Lloyd Webber,

The concert was conceived and created by Sarah Brightman, Anthony Von Laast (Mamma Mia, Beauty and the Beast), and Frank Peterson (Enigma, Andrea Bocelli) and produced by Fathom Entertainment, 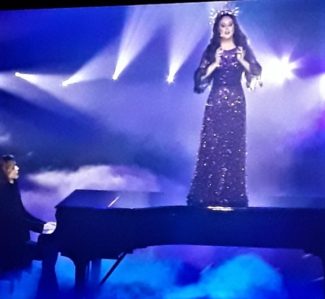 Brightman’s 90-minute performance is a hybrid of a musical film, staged in two acts: classical-crossover program and a large-scale concert production.

Brightman is accompanied by her band, the Bavarian Philharmonic orchestra, a 50-voice choir and the Ludwig Ensemble of dancers.

Yes, she really does sing atop of the piano, enrobed in sparkling Swarovski crystals! 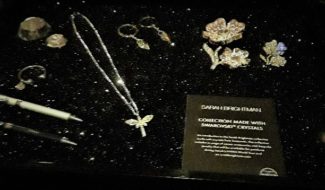 Brightman as has partnered with Swarovski, designing her own line of HYMN inspired jewelry that will be for sale during her tour and at her website (https://sarahbrightman.com/store/).

The stunning gown she wears is encrusted with glittering Swarovski crystals and also the headpieces the glitter as the lighting changes. These are just stunning!

HYMN is Brightman’s fifteenth full-length album. A collection of her earlier works and an exploration of new materials this latest album has her characteristic glamor and sophistication.

Advicesisters.com was invited to the NYC premiere of the film.  Brightman was present. She said that after attending space camp training (to be the first singer in space) she decided to forego the extra-terrestrial for the ethereal with a mix of orchestrated, choir based songs.

She reviews her roots in the first act of HYMN, touching on some old favorites and then lifts you up with heavenly and eclectic songs.

Collaborating with Brightman is Yoshiki a Japanese pop star best known for his co-founding of X Japan, a heavy metal band where he is the drummer, pianist, and main songwriter.

Mario Frangoulis, a renown greek tenor who has appeared in Phantom of the Opera also makes an appearance with his rendition of the Phantom beside Brightman in Angel of Music.

Vincent Niclo: the French Tenor, joins Brightman in bringing drama and beauty to new single Sogni. Romanian singer Narcis brings ethereal light to Pie Jesu in the later half of the concert.

For those who want to experience the spectacle and the artistry themselves, The Hymn World Tour will begin in South America and include over 125 shows, on 5 continents throughout 2018/2019 (https://sarahbrightman.com/tours/) 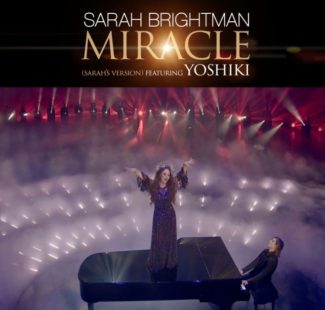 The special-edition digital single of Sarah Brightman’s performance of “Miracle”–composed by YOSHIKI with a new arrangement for her recently-released album HYMN –is now available on Itunes. (you can see a YouTube video

For any other information you may need about the tour please consult the Sarah Brightman official website https://sarahbrightman.com/ or visit Fathom Entertainment at: https://www.fathomevents.com/

this report by Sam Witting for advicesisters.com