You are here: Home / Alison's Blog / Winter is here to stay, at least for 6 more weeks (Punxsutawney Phil
Like it? Share it!

Do you want to know a big secret? February 2nd is my favorite day of the year.  It’s Groundhog day!

February 2nd has special meaning, because it is the day that the groundhogs tell us whether or not we will have an early SPRING. The undisputed king of the groundhogs is Punxsutawney Phil (he is the “prognosticator of prognosticators.”  But, for example, there are a  variety of groundhogs called “Staten Island Chuck ,”  relentlessly promoted as a good predictor –but Chuck bit Mayor Bloomberg of NYC  one year, and last year Mayor DeBlasio dropped his official “Chuck” and that groundhog died not long aftterwards).  You really need to be an animal  handler to deal with a groundhog.

I really dislike Winter. Whether or not the groundhog sees a shadow or not, by February 2nd, the days are actually getting longer, and I know that Winter, however bad right now, will end.  How can you not love a holiday that celebrates the notion that Spring is on the way?  The feature is a cute, furry animal (he actually comes out to scent mark his territory, not tell the weather, but that’s another story).  And, I have yet to find  “groundhog day” commercials that bludgeon me for weeks about “the day” (unlike Christmas) or force me to be more “festive” than I might want to be.   But it is traditional to celebrate the day, and this advicesisters.com feature, is my gift to you!

So did Punxsutawney Phil (or those “other” groundhogs see shadows this morning?  If so,we are in for six more weeks of Winter for us! (read on to find out)

Groundhogs are part of the marmot family= and they are quite cute, and much larger than you might imagine, but if you are a weatherperson, you might not love this day so much. The most junior person is usually dispatched to cover the official Groundhog Day festivities in  Punxsutawney Pennsylvania. I have been there and it’s in the middle of nowhere. The weather is usually chilly, and most times in early February, snowy and extremely cold.  This year in 2015 the attendance was down from 15,000 to 11,009 people standing atop Gobblers Knob,  before daylight, waiting for the “Inner Circle” (a bunch of guys in top hats) to tell the world whether or not an official  Punxsutawney ‘Phil” thinks we’re in for an early Spring, or six more weeks of Winter. Once the  large group of very cold but enthusiastic onlookers,  news crews and weatherpeople have seen Phil’s official handler determine if the groundhog has seen his shadow, it’s time to party (or race back to a nice, warm room).

There are several favorites among these groundhog prognosticators. Obviously, I am a fan of  Punxsutawney Phil but you can go with one of the predictions from any of the popular pretenders to his throne (um…burrow) .

this groundhog used to live under my fire pit, but it’s Summer in this photo!

This is the story behind the famous forecaster and why his wild relatives snooze over the winter months:

Groundhog Day (February 2nd) has it’s roots in a European tradition that if a hibernating animal (usually a hedgehog) casts a shadow February 2nd (Candlemas) then winter will last another six weeks. If no shadow is seen, Spring will come early! The legend states: “For as the sun shines on Candlemas Day, so far will the snow swirl in May…” When German settles came to Pennsylvania’s to settle early in America’s history, they continued the tradition, exchanging the hedgehog for the more abundant, groundhog.  In reality, ground hogs hibernate, but the males come out of their burrows in early February to do something of great importance to the continuation of the species. They scent mark their territory for mating season, which begins in mid-February, soon after the animals emerge from hibernation. Pregnancy lasts 31-33 days and the single, annual litter of 2 to 9 pups is born toward the end of March or early April. Most groundhogs have a short lifespan, but some have lived 6 years or more. A ground hog named “Nitche Ned” lived under my fire pit for years, bringing a friend “Nitche Nell” and some babies. 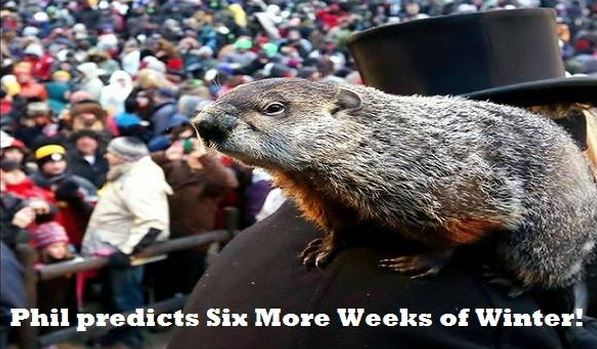 The GROUNDHOG’S PROGNOSTICATION FOR WINTER 2015: PHIL SAW HIS SHADOW, but Staten Island Chuck didn’t, so I’m going with PHIL ( six more weeks of Winter). If you don’t want to believe it, The Weather Channel, in honor of Groundhog Day on Feb. 2, has compiled its list of the “Top 11 Groundhogs to Watch” based on accuracy and popularity.